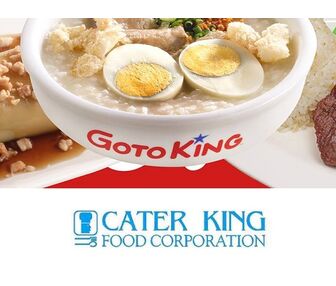 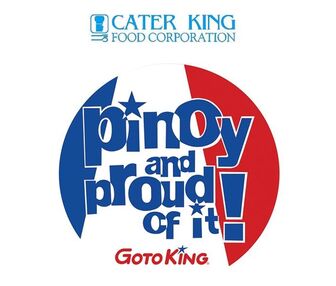 Cater King Food Corporation has been in the food for 31 years now operating Goto King, one of the phenomenal success stories in the food industry. Started as a kiosk selling goto, the classic Filipino comfort food, Goto King's instant success was due in part to its concept; selling street food in the air conditioned comfort of malls - a very novel idea back then but so common now.

Such innovative and forward thinking spirit is a hallmark of Cater King. It soon, transformed a one-product kiosk, into a chain of stand alone restaurants, food court outlets and kioks found not only in the Greater Metro Manila area but up north in Tuguegarao and down south in Cavite and Cebu. Together with this physical expansion was the introduction into the menu of more merienda items such as arroz caldo, batchoy, palabok, diniguan, lumpia, as well as refreshments such as sago't gulaman and halo halo.

As Goto King begins it third decade, it is, once again, reinventing itself. It is expanding its rice meal by including freshly cooked viands displayed in slow cookers in the store counter. The concept is called Goto King Plus which management is perfecting with the end in view of remaining the Goto King brand.